The One who determines our steps

by Laurie Short | Mar 14, 2017 | Faith, Reframe your life, when changing nothing changes everything

It happened AGAIN. A couple of weeks ago, I was on a plane headed to one place, when the pilot driving the plane told us we needed to go somewhere else. Because of a previous delay, the crew had “timed out”; so instead of going to Denver, we were going to St. Louis to pick up another crew.

I’d love to tell you that in situations like these, I immediately begin singing worship songs and submitting to God’s sovereign plan. If you know someone who does that, please give them my name for counseling. But THIS ALREADY HAPPENED TO ME once before. (see here for details:http://bit.ly/2mmaCbD ) Not that God is trying to teach me anything about my control issues. The best part was, none of us were told about the trip to St. Louis until the door was closed and we were in our seats. Let’s just say I wasn’t the only one on the plane a little perturbed. 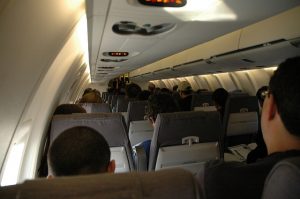 It strikes me in those instances that there is absolutely nothing you can do except decide how you will live your circumstances. And that is actually a big theme in my new book. One person got so mad he got off the plane—even though there were no other planes going to Denver the rest of the day.

I was picturing him in the Knoxville terminal saying “That’ll show them!” as he spent the rest of the day and night in Tennessee.

So I stayed on board. I missed my connection in Denver, got on another plane headed to LA, and the cherry on top was when my final plane to Santa Barbara was delayed and I got home at 1 am. Needless to say my husband was thrilled.

Shortly after this great adventure, I was spending some alone time with God when a verse suddenly popped in my head. When that happens, there is a pretty good chance God is trying to tell you something. Here were the words that came into my mind: “In his heart a man plans his course, but the Lord determines his steps.” Connecting the dots, I suddenly realized that my airplane debacle could have been God pulling a “I’m going to have you live this verse so you’ll really get the message” thing in my life.

With a new book coming out, (see here for details: http://bit.ly/2mnUzKs), my mind has shifted into planning and plotting mode, and it’s very possible that God wants to remind me that the unfolding of the book’s future is in His hands. It’s not that planning and plotting is bad, these days it’s necessary—in fact the publisher asks authors to be very involved in the marketing strategy of their book. But the message of the verse that came into my head is that ultimately, He is in charge of the book’s course. From who will hear about it, to who will pick it up; from who will give it to someone else, to what the words do in that person’s life. I have some dreams in mind, but the Lord will ultimately direct it’s course.

Perhaps you need to be reminded of that in a situation or circumstance of your own.

And even when we think we are on the way to Denver, we may end up in St. Louis instead. Because that’s just the way The Lord rolls. And since He sees what we can’t see, and knows what we don’t know, our best response is to stay on the plane. Because we may end up somewhere we never would have dreamed.